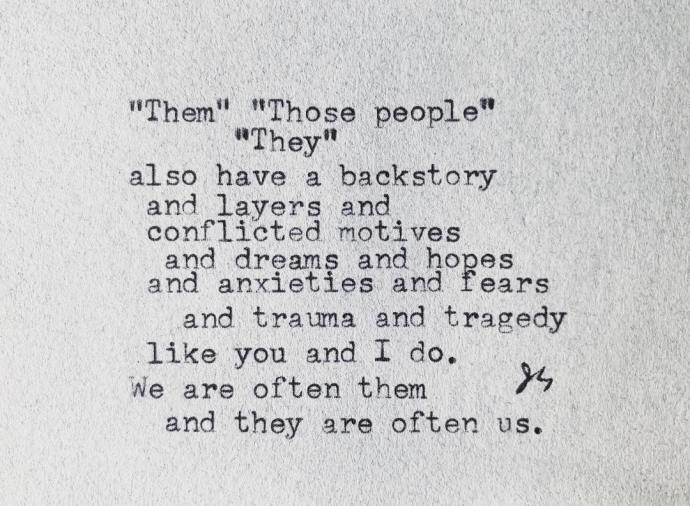 The nurse told me that the patient Willard had taken a bite out of another nurse. He had swung at one of the doctors and thrown urine at a surgeon. Willard couldn’t walk; he kept demanding to go home. “Get me a wheelchair, I’ll flop in and ride over you people.” The staff kept trying to get him to stay, to get treated, despite his violent non-compliance, because nurses and doctors have the guts to look past that stuff.

The staff called for a chaplain, and I was the lucky one. I walked in and saw the patient had a tattoo of a swastika on his hand enclosed in a heart.

My eyes locked on the swastika first. The symbol held a terrible place in my memory: when I was a kid, someone had spray-painted a red swastika next to the front door of my dad’s business. Though my dad had tried to paint over it, I could still see it on hot summer days, a scar on the wall and a scar in my head, a mad throbbing declaration of all the world’s ugliness dripping in crimson. I still dream about it sometimes, and in the dream I’ll peer down at my wrists, engraved with the same red marks down to the veins.

The patient, Willard, saw me and said, “Thank God, a chaplain, finally someone who can hear me.”

But I didn’t want to hear him. And a part of me also thought, “You deserve this. I hope you never leave. Then you can’t hurt anyone out there.”

He said, “Look, I see your face, I’m not trying to hurt anybody. You get it? I just want to go home. Fetch me a f__ing wheelchair, would you?.”

Willard got louder. He clenched his fists and waved them around. He went into an f-bomb monologue about the staff, “you people,” about the whole dang world.

I had half a mind to leave. I didn’t have to stay. I didn’t want to stay. I kept looking at that swastika. I kept thinking he deserved to be here, to be sick and sorry and helpless.

When Willard stopped talking for a moment, I said the only thing I could think of.

“I’m sorry, Mr. Willard. It sounds like you have a lot going on and it’s been really hard for you.”

Just like that, his face flipped from anger to grief, and his entire body melted into the bed. Just a broken down old man, crying.

Then he motioned so I could hold his hand. He needed me to hold that hand.

For a second, I stood there, confused and bewildered and infuriated. And I pictured two of me, one turning about face and never looking back, and the other me stepping forward in an ostensible betrayal of my deepest values, of my father, of that little child who had to ask why someone would paint such a dirty symbol of hatred over us. I remembered going with my dad to buy new paint, his face set and smiling and determined to be better than this, to make it in a harsh, lonely country that never fully welcomed him but that he welcomed anyway, because he dared to believe in bigger dreams than the ones that had been painted for him. And I wondered if all of us were ever going to make it like this, that if we walked away from each other that we would ever heal, and if maybe the very same hands that could carve such scars could also build a life through those wounds, too.

My dad had showed me something better. He dreamed bigger. He built the dream in me.

I held that man’s hand. I held his swastika, that ugly little tattoo with the heart tattooed around it.

Willard sobbed, loudly. I asked if he believed in prayer, and he did. I prayed. When I finished, I tried to pull my hand back, but he wasn’t having it. The nurse walked in, a little alarmed, giving me that look: “This guy is a real human being who cries, huh?”

The nurse prepared a syringe and gave Willard a few shots. Willard nearly crushed my hand. He kept sobbing; I must’ve held his hand for fifteen minutes while he wept and wept.

When we parted, Willard looked up at me with eyes brimming red.

He didn’t say anything. He only nodded. And inexplicably, we both laughed. I don’t know why we laughed, but it was good.

Later, I told my fellow chaplain, “I have to tell you the craziest story.”

And my friend, at the end, laughed at the obvious symbolism.

“I guess you were the heart around that guy’s swastika.”

I could only nod. I was my father, painting over old scars.